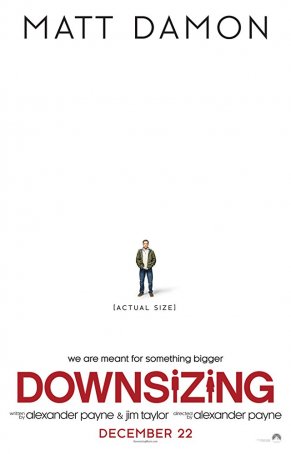 For a movie about small people, Downsizing certainly thinks big…too big, perhaps. Director/co-writer Alexander Payne has done such a good job of world-building that there are far too many ideas, subplots, and opportunities for one two-hour film to contain and the sense of truncation becomes constraining. (A TV/streaming mini-series à la Westworld might have been perfect.) Unfortunately, the primary story Downsizing elects to follow turns out to be rather unremarkable. The character arc of Paul Safranek (Matt Damon) lacks verve and, although some will appreciate the low-key denouement, the film as a whole exudes unfulfilled potential and the ending provokes little more than a shrug of the shoulders. I cared less about the resolution of Paul’s story than was needed for the movie to succeed.

The movie opens at an unspecified future date. Scientists in Norway, having determined that overpopulation is the greatest threat facing humankind, devise a way to miniaturize living creatures. Five years later, a pioneer team, led by Dr. Jorgen Asbjornsen (Rolf Lassgard), have set up a commune for small people. It becomes a major news story and, when we first meet Paul at an Omaha bar, he is amazed. Ten years into the future, “downsizing”, as the process has become known, is an increasingly popular option for cash-strapped middle-class citizens seeking to stretch their money. Although scientists initially envisioned downsizing as an environmentally friendly lifestyle (a five-inch person has a vastly smaller carbon footprint than a full-sized individual), one dollar in the “big world” is worth orders of magnitude more in the “small” one. So many people are transitioning in order to lead a life of luxury. 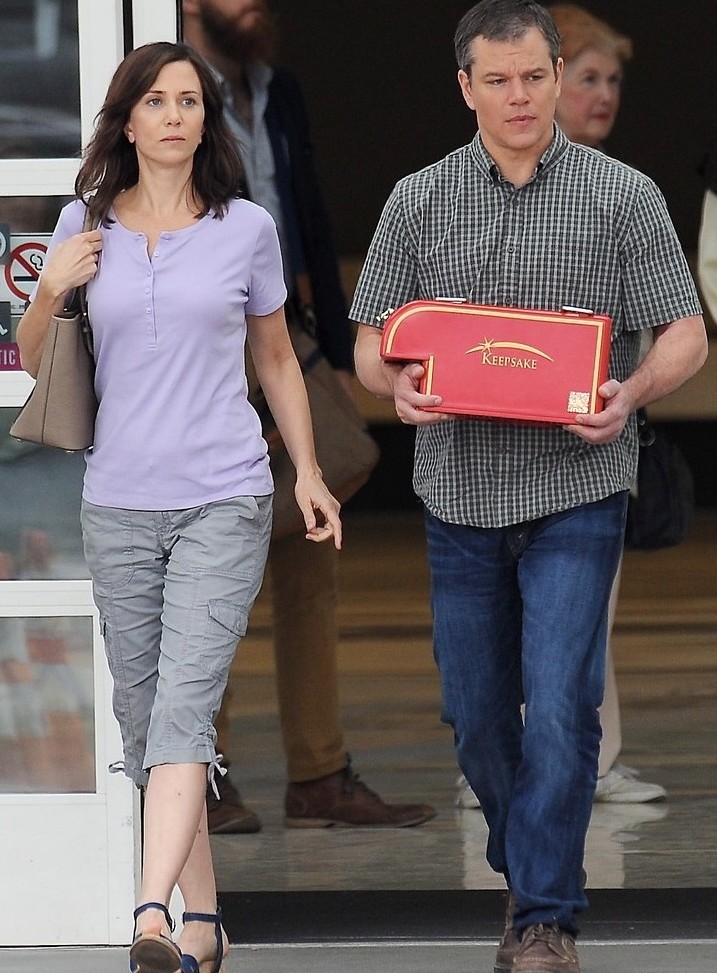 Paul and his wife, Audrey (Kristen Wiig), decided to make a plunge when their mortgage application is rejected due to a poor earnings-to-debt ratio. They learn that their assets – all $150K of them – will be worth more than $12M in “Leisureland.” So they take the leap but, when Paul awakens, he learns that everything didn’t go as expected. Instead of living in the lap of luxury, he’s forced to rent an apartment living beneath the obnoxious Dusan Mirkovic (Christoph Waltz) and take a job for a cleaning service run by Vietnam refugee Ngoc Lan Tran (Hong Chau), who was forced by her government to undergo the downsizing process.

It would be easy enough to dismiss Downsizing as an adult version of Honey, I Shrunk the Kids, but that would be unfair. The only elements the films share is the shrinking aspect. Downsizing isn’t an adventure film – it’s a serious movie dealing with serious issues. Environmental irresponsibility and climate change are both on Payne’s mind. He also has an ax to grind about the current culture of consumerism. Downsizing, like many sci-fi/fantasy movies, is political.

The movie’s most obvious flaw – and it’s a huge one – is that, after establishing everything and introducing the characters, it doesn’t seem to know what to do with the vast canvas. So it paints a small picture, using only a fraction of the available real estate, and doesn’t do enough to engage the audience. The first 45 minutes of Downsizing are brilliant. The final 90 minutes are mediocre at best and there are times when things sputter and seem not to have a clear direction. Eventually, we figure out that Downsizing is about Paul’s existential journey, but he’s not the most dynamic of characters. The only thing that works is his relationship with Ngoc Lan Tran, and that’s in part because (despite caricature elements like her broken English) she’s a more interesting person than he is. The movie is already spinning its wheels when Payne decides to toss in an “end of the world” scenario. It’s either poorly thought-out or poorly explained (difficult to ascertain which is the case) and introduces a lot of head-scratching questions. The ending is muted and anti-climactic. 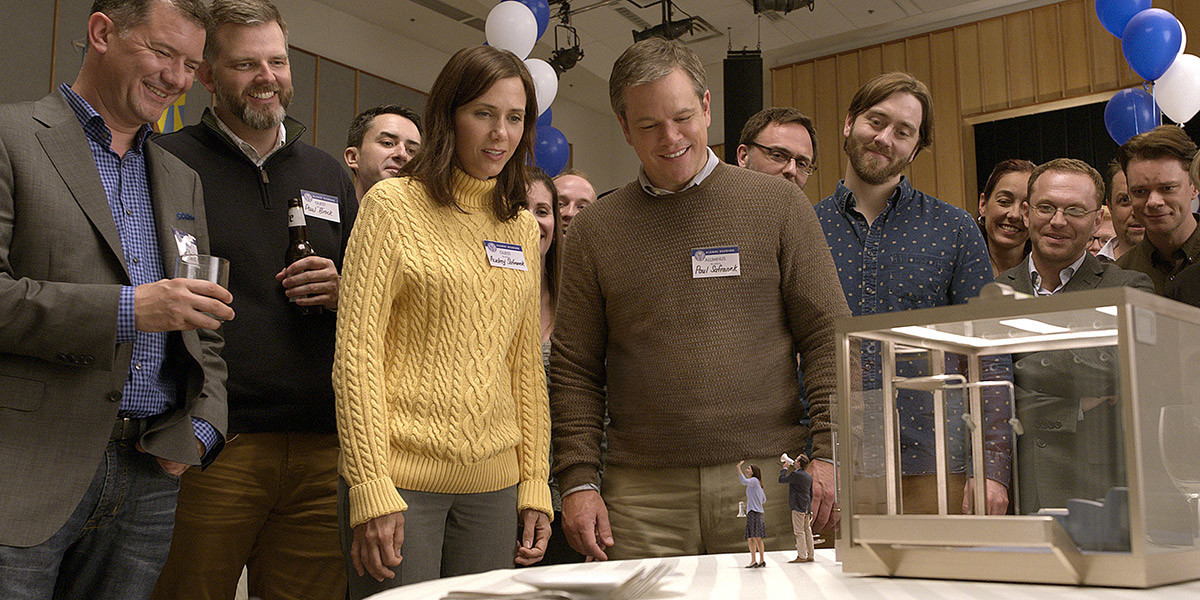 For Payne, whose precise, incisive efforts have included Sideways and Nebraska, Downsizing may be his most serious movie to date – and his least effective. Although it doesn’t abandon satire altogether (there are biting cameos by Neil Patrick Harris and Laura Dern), most of Paul’s journey is presented without tongue in cheek. There are occasions when Payne remembers to inject a little comedy into the dialogue (one example being when two characters banter about what kind of “fuck” they had) but the initially playful tone turns dour and the preaching grows louder. This is partly intentional – the more we learn about the world of the downsized downtrodden, the more apparent it becomes that the process hasn’t wiped away class struggles and income inequality – but it’s also a result of the lack of narrative momentum.

As Downsizing progressed, I realized that I wanted to learn more about just about every character in the film except Paul. Damon’s earnestness, which was an asset in The Martian, does nothing here. He and actress Hong Chau exhibit chemistry but it’s not enough to keep Downsizing from capsizing. The fundamental miscalculation is thinking that Paul’s story is sufficiently interesting to captivate a viewer. There are some fantastic things happening in Downsizing. It’s a movie of big concepts and bigger aspirations. Unfortunately, the central character is as small figuratively as he is literally, and that limits the movie’s capacity to enthrall and engage.