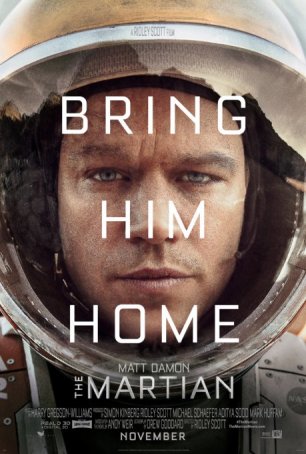 The Martian is the latest in a series of realistic science fiction films - movies that eschew the space opera elements of the genre and concentrate instead on believable aspects. Following in the wake of Christopher Nolan's Interstellar (and featuring two of the same cast members), The Martian speculates about how a near-future manned Mars mission might evolve. With the exception of a slightly over-the-top ending, the film mostly avoids the "Hollywood-isms" that sometimes degrade science fiction into futuristic fantasy. This is neither an action-oriented motion picture nor a special effects extravaganza. It's an introspective story about what it might be like to be the sole inhabitant of a distant world and knowing that instant communication isn't possible and a rescue is at best a year away. It's also an examination of how necessity truly can be the mother of invention - not only for the survivor but for those on Earth seeking to find a way to save him.

The events of The Martian transpire in the near future, although an exact date isn't given. As the movie opens, the six-person crew of the Ares 3 mission are on the planet's surface conducting experiments and gathering samples. In addition to astronaut Mark Watney (Matt Damon) and mission Captain Melissa Lewis (Jessica Chastain), the crew includes pilot Rick Martinez (Michael Pena), chemist Alex Vogel (Aksel Hennie), and specialists Beth Johanssen (Kate Mara) and Chris Beck (Sebastian Stan). The approach of a major storm - one that has the potential of tearing apart the fragile artificial habitat - forces Lewis to order an emergency evacuation. In the race to the escape craft, Watney is struck by a piece of flying debris, lost, and presumed dead. He is reluctantly left behind by his fellows. When NASA receives the news, director Teddy Sanders (Jeff Daniels) and Mars mission controller Vincent Kapoor (Chiwetel Ejiofor) make the news of the death public. 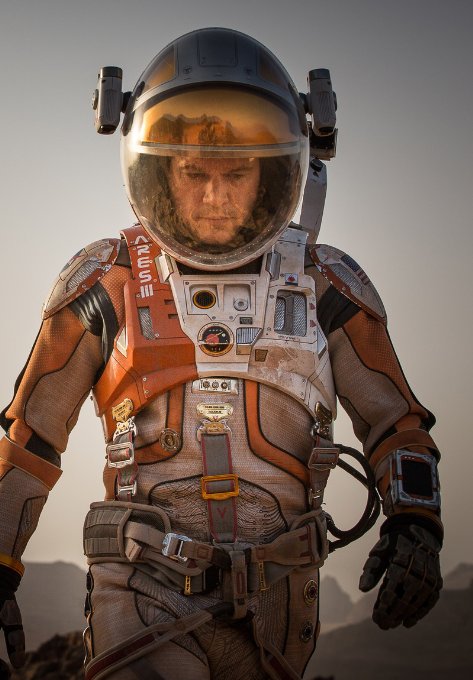 Watney isn't dead, however. Although injured, he is able to use an emergency medical kit to close a wound and, after coming to terms with the enormity of his situation, he assesses what he will have to do to survive. Within a month, NASA has become aware of his survival and, not long after, rudimentary communications are possible. The film then becomes a race against time to save Watney before his provisions run out.

Most movies about Mars (and there have been a lot of them) are hybrid science fiction-horror or science fiction-thriller productions with little emphasis on the "science fiction" part of the equation. Since The Martian isn't interested in the exploitation aspect, that makes it an outlier in the "Mars" canon. Instead, it's a close cousin to sci-fi stories like Moon, Gravity, and Interstellar and deals with some of the same themes and ideas as Cast Away and Touching the Void. The Martian's drama evolves from showing how the character copes with isolation. There are certainly physical challenges but the psychological difficulties are the most compelling ones. 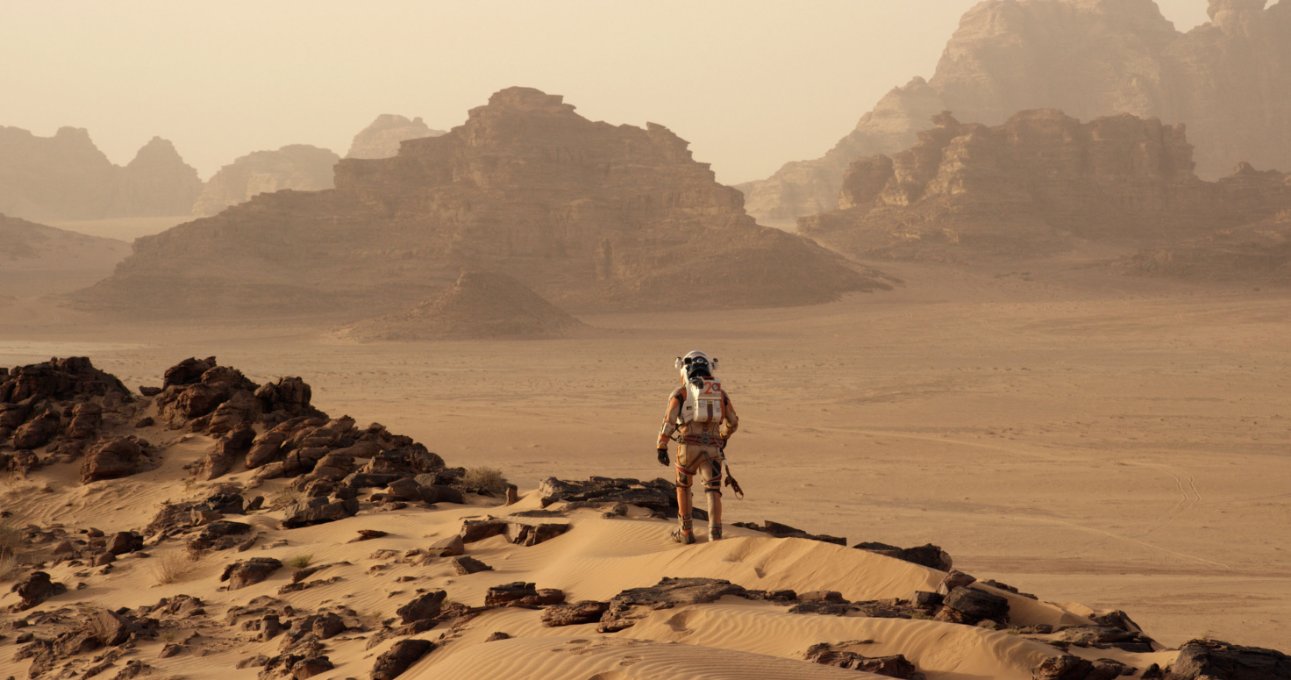 Although the concept of a modern day Robinson Crusoe marooned on Mars might sound like a depressing proposition, the film's tone never ventures into dark and downbeat territory. Without detracting from the seriousness of the situation, director Ridley Scott infuses the production with moments of low-key, appropriate comedy. Watney's introspective video journals illustrate not only his practicality and innovation but his wry (sometimes gallows) sense of humor. Likewise, some of the Earth-based scenes, while not openly comedic, are played with a lighthearted sensibility.

For Matt Damon, this is a rare opportunity to show his range. Neither action hero nor supporting character nor George Clooney sidekick, he gives a performance to rival The Departed as the best of his career.  One key difference: here, he isn't surrounded by the likes of Leonardo DiCaprio, Jack Nicholson, and Martin Sheen. This is Damon's movie and it's hard to find a flaw in the way he brings Watney to life. The fear, the anguish, the loneliness, the desperation, and the joy… they're all there. Only once does Watney give into despair and, on that occasion, it doesn't last long. The secondary cast is impressive, with names like Jessica Chastain, Kristin Wiig, Chiwetel Ejiofor, and Sean Bean lending their talents, but their roles aren't large. They support and never threaten to take the spotlight away from Damon. (Considering that he also played a stranded astronaut in Interstellar, one wonders whether he has become Hollywood's go-to guy for this kind of character.)

As a director, Ridley Scott is by no means a "can't miss" proposition.  Although one can rarely fault his ambition, the results have been mixed, especially in recent years. When it comes to science fiction, however, Scott's track record is solid: Alien, Blade Runner, Prometheus - two bona fide classics and one flawed but compelling odyssey. The Martian is a different kind of film from those but no less impressive. Scott uses special effects as a tool to enhance the experience rather than as the means to define it. Many of the effects in The Martian are of the practical variety with CGI used primarily to add an otherworldly flavor to the Martian landscape. The space sequences are nearly as good as those in Gravity. The 3D, although not as impressive as in Alfonso Cuaron's 2013 picture, feels neither gimmicky nor unnecessary. As uneven a director as Scott can be, he can do some amazing things when he's "on"; this is one such occasion. 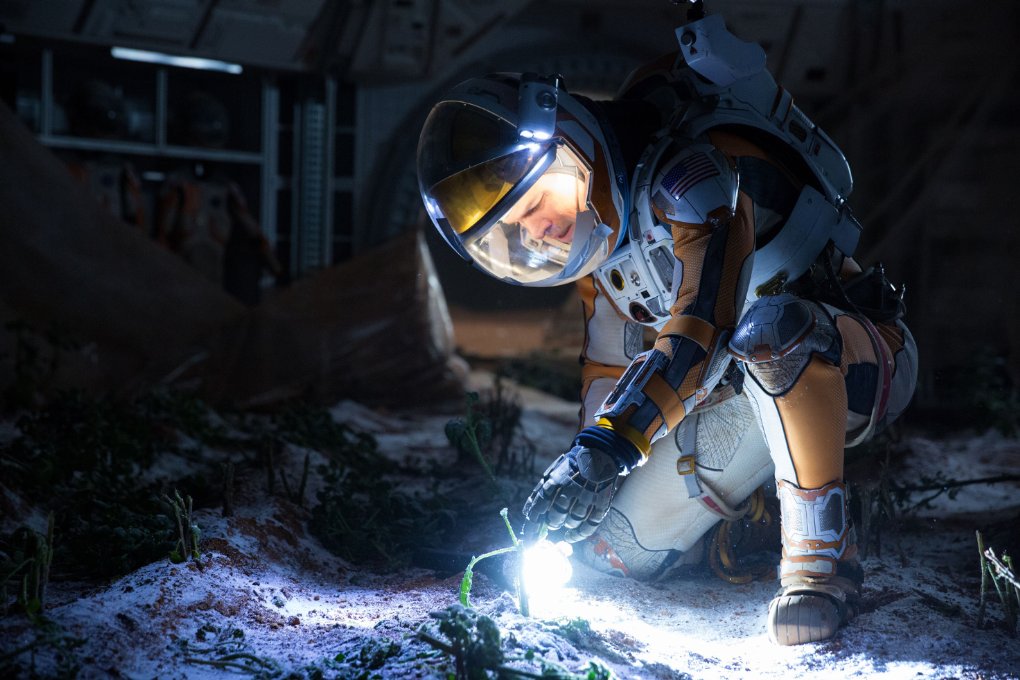 The Martian is based on Andy Weir's novel of the same name and uses a similar science-based approach to many of its scenes. NASA was involved both at the script stage and during filming and, although there are instances in which The Martian takes liberties with the laws of physics, it presents one of the most accurate screen depictions of space travel to date. This authenticity is one of the factors that attracted Damon and Scott to the project and Weir's continued involvement brought NASA on board.

In releasing The Martian, 20th Century Fox has fired the first shot in the 2015 Oscar competition. Although the science fiction genre is more often associated with the escapist fare of summer than the serious offerings of the fall, The Martian is an exception. Those who crave nonstop action and seizure-promoting editing may find this film's pace too deliberate. They may be unable to appreciate its character focus and slow but undeniable build-up of tension. This is science fiction for sophisticated audiences and, as such, a fulfilling and satisfying experience.