After the misstep of Mistress America, The Meyerowitz Stories (full name: The Meyerowitz Stories (New and Selected)) represents a “return to form” for writer/director Noah Baumbach. Less pretentious and self-indulgent than some of his mumblecore-influenced films, this movie applies Woody Allen’s favorite technique of using filmmaking as a form of self-therapy. Although I can’t say for certain that aspects of The Meyerowitz Stories are autobiographical, the movie feels like Baumbach is working through some family issues.

The production is divided into four distinct chapters, each of which represents one of the titular “stories.” The episodes are presented chronologically and, in general, feature the same cast of characters. There are jumps in time between each but nothing so disconcerting that it disorients viewers or interrupts the flow of the narrative. Although the movie would properly be classified as a drama, the tone is light and there are times when Baumbach opts for moments of outright comedy. His treatment of art and film school movie-making are openly satirical. 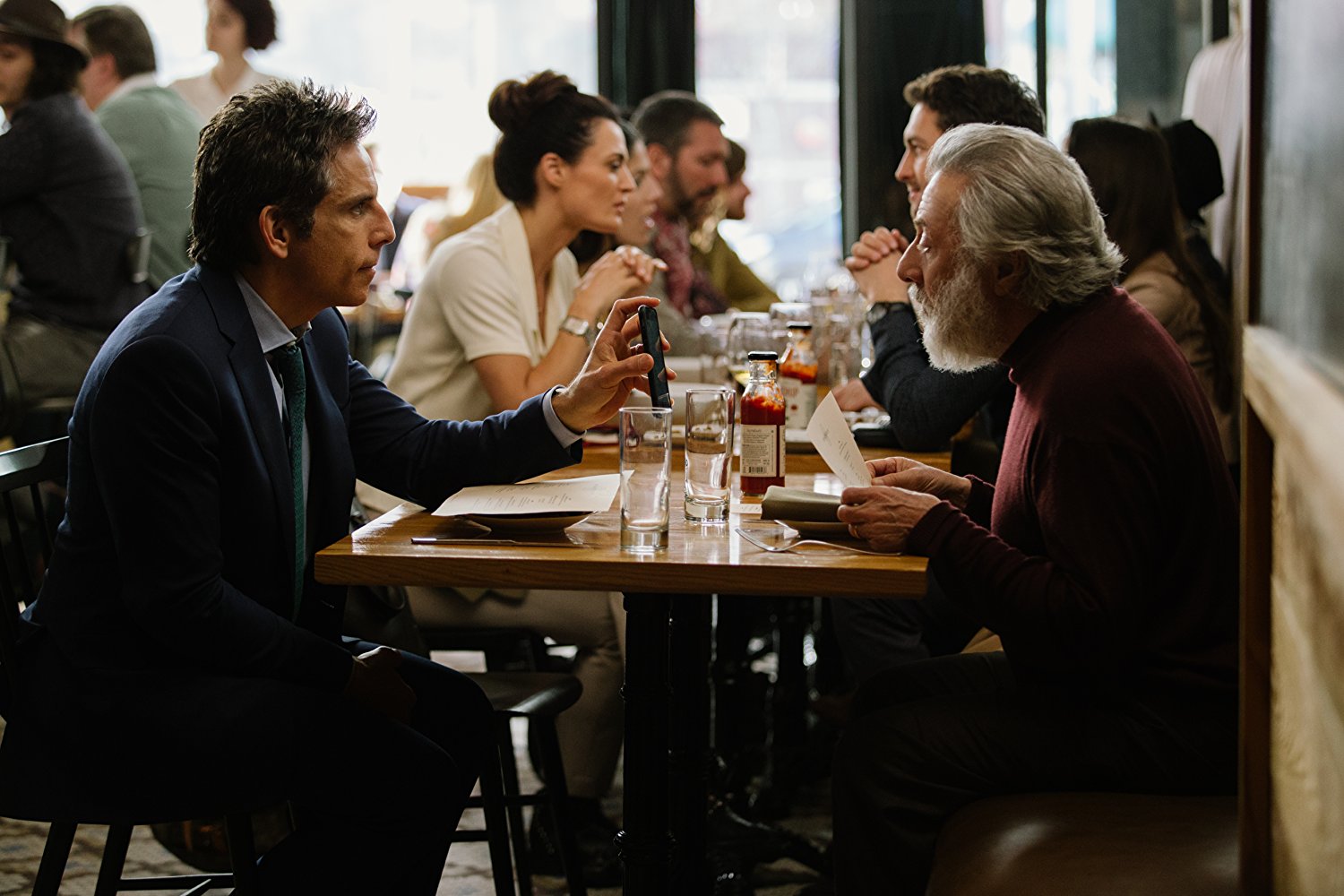 The first segment introduces us to Danny (Adam Sandler), the oldest son of Harold Meyerowitz (Dustin Hoffman). He and his soon-to-be-college-freshman daughter, Eliza (Grace Van Patten), are visiting Harold and his fourth wife, Maureen (Emma Thompson). Danny’s younger half-brother, Matthew (Ben Stiller), joins the cast in the second segment when he pays a whirlwind visit to his father and old grievances surface. In episode #3, a life-altering event shakes the family, forcing the three Meyerowitz children – Danny, Matthew, and their sister, Jean (Elizabeth Marvel) – to confront the past demons that inform their current relationships. Finally, in a fourth story that serves as an epilogue, we see the characters moving forward with a (hopefully) more heathy family dynamic in place.

Baumbach’s setting and approach invite comparisons to Woody Allen but, at least insofar as The Meyerowitz Stories is concerned, there’s less angst than Allen’s films typically express. The character interaction, especially the strained father-children relationships, is far from unique – it’s a common staple of introspective indie films, making me wonder how commonplace this sort of domineering, insufferable father-figure is in the culture from which many of these filmmakers emerge. Baumbach sketches out the intra-family conflicts with aptitude, making sure there’s enough lightness to avoid a spiral into the kind of grim and humorless affair the French are fond of, but there’s an element of familiarity to the overall narrative arc.

As if to counter his critics’ perception that he’s thin-skinned and sometimes takes himself too seriously, Baumbach offers pointed (but never scathing) satires of modern art and film-school projects. For the former, he makes it clear that Harold’s ballyhooed sculptures as merely blocks of wood glued together. Baumbach’s approach to the art scene and the personalities associated with it is straight-faced (tongue planted in cheek, of course). Likewise, when presenting Eliza’s sexually explicit student films, The Meyerowitz Stories contrasts the awfulness of the projects (of which we are afforded glimpses) with the rapturous praise heaped on them. 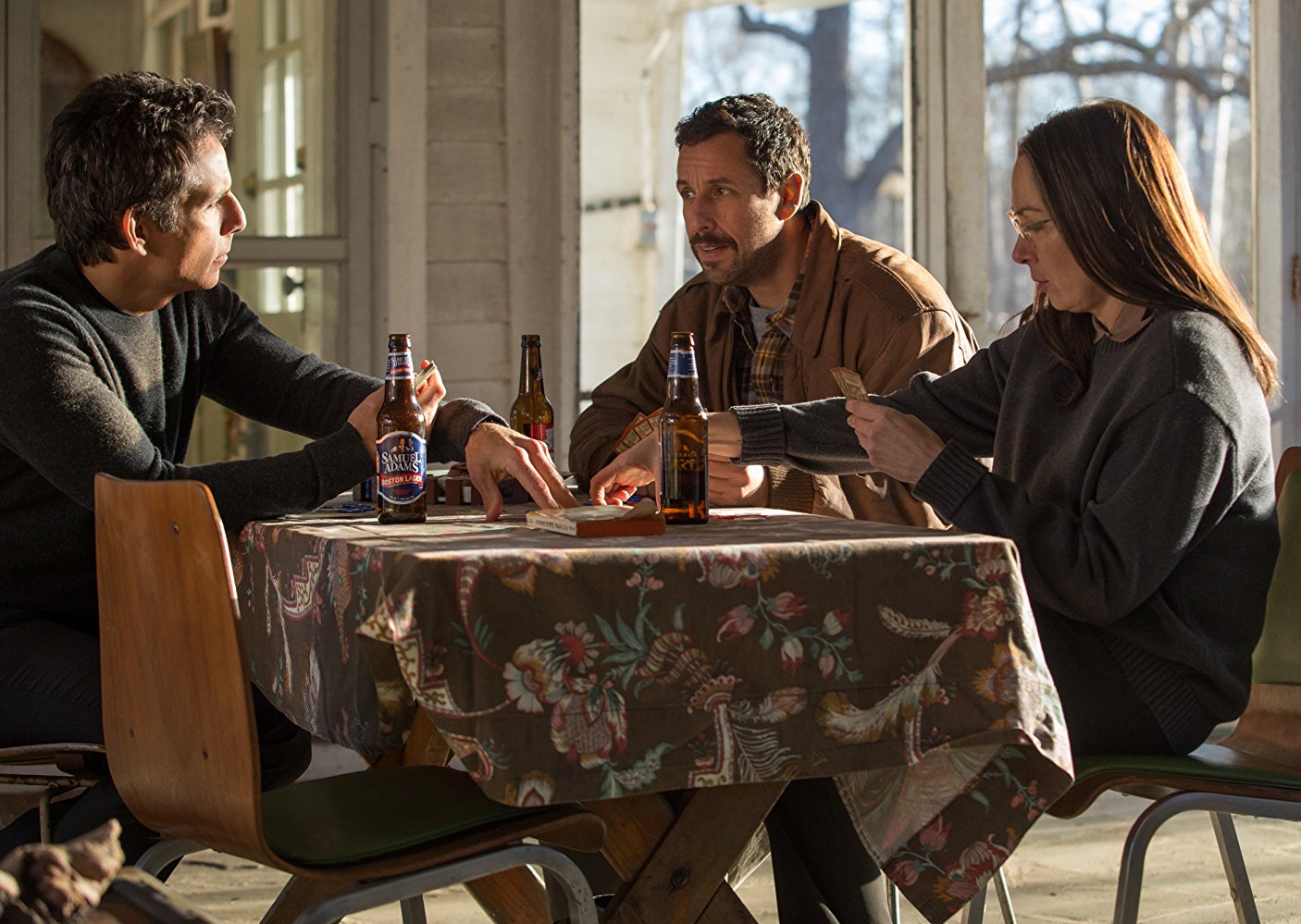 The Meyerowitz Stories features Baumbach’s highest profile cast to date. The veteran of the group is Dustin Hoffman, who has no difficulty presenting Harold as insufferable and overbearing. This isn’t some loveable old codger we’re supposed to warm up to. For Adam Sandler, this is an opportunity to drop the clown persona and do some serious acting – something he has shown an aptitude for in the past. His portrayal of Danny is a reminder that when not playing to his “base”, Sandler has more range than one might suppose. Ben Stiller, now a frequent Baumbach collaborator, is appearing in his third outing for the director. Emma Thompson, sporting a hippie look and American accent, lends her support in a small-ish role. Up-and-coming actress Grace Van Patten offers freshness and energy. Cameos are provided by Adam Driver and Candice Bergen.

The Meyerowitz Stories is the latest film to be acquired and distributed by Netflix as part of an effort to diversify and provide original content. Baumbach’s intimate style is ideal for a company whose offerings are often seen on small screens. This film won’t lose much on an iPad since it’s more about relationships and character interaction than spectacle. The Meyerowitz Stories is passably entertaining and by no means painful to sit through but the big emotional moments lack power and there’s too much awareness of the actors at the expense of the characters. It functions more as a diversion than a fully satisfying motion picture, although, for something streaming on Netflix, a “diversion” is usually good enough.