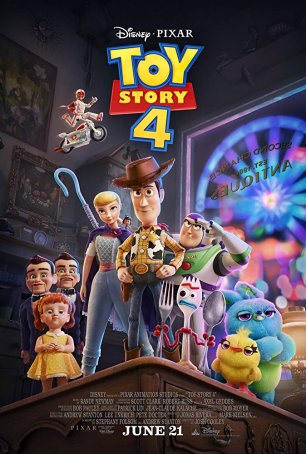 By nature, endings are sad. Therefore, it’s understandable if a few tears are shed when the final credits begin rolling at the conclusion of Toy Story 4. After all, according to everyone involved, this is reallytrulywepromisethistime the swansong for the animated toys who have been our cinematic companions for the last quarter century. An entire generation has grown up with Woody, Buzz, and their compatriots. They have been our friends and, even though Toy Story 4 sometimes feels like a regurgitation and retread of the earlier films, there’s something warm and comforting about spending 100 minutes in their company again.

Part of the problem with Toy Story 4’s existence is that the ending of Toy Story 3 was as close to perfect as one could imagine – a coda that spoke differently (but no less effectively) to adults and children. The franchise continued its existence post-2010 in a series of shorts and made-for-TV specials – a reasonable way to provide fans with a “fix” while not disrupting the lasting impressions of the third theatrical release. The lure of more, however, eventually caused Disney/Pixar to relent and Toy Story 4 is the result – a respectable afterthought sequel that is paradoxically welcome and unnecessary. 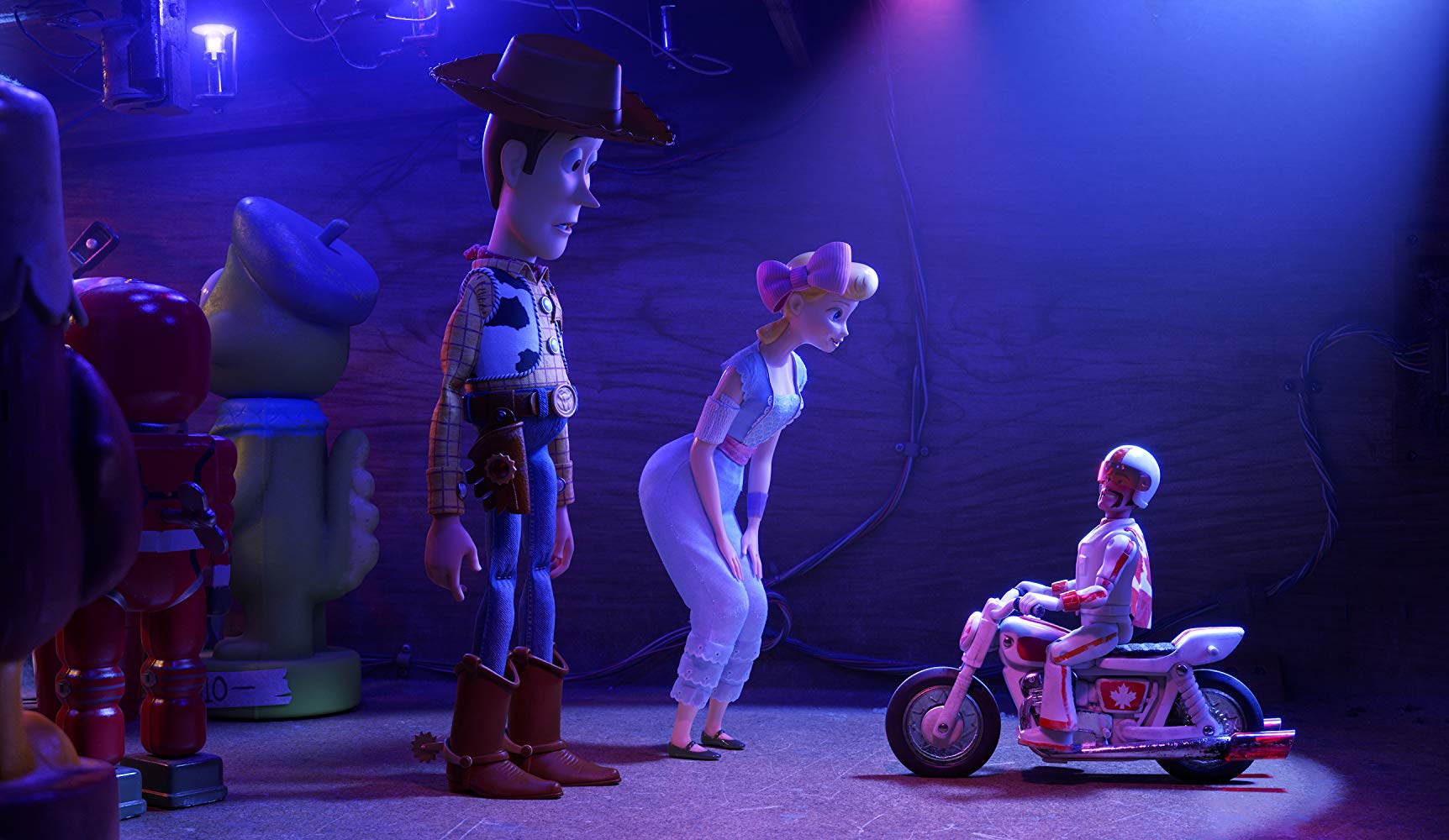 Toy Story 4 illustrates what has been speculated since it was announced: there’s really no new ground to cover. Most of the movie tills soil that has already been farmed in one or more of its predecessors. The central concept of kids outgrowing toys as a metaphor for the bittersweet progression of life isn’t as poignant as it was in the past. The action sequences seem more obligatory than organic. There are times when you can sense that screenwriters Andrew Stanton and Stephany Folsom (aided by a host of uncredited contributors) are straining to fill out a thin storyline with enough material to justify a feature film. In a way, it’s surprising that the end result is as satisfying as it is, but maybe that has something to do with the deep affection we feel for Woody, Buzz, and all the other toys and action figures that once populated Andy’s room.

The movie opens with a prologue set between the events of Toy Story 2 and Toy Story 3. They explain the mysterious absence of Bo Peep (Annie Potts) from the third film – something referenced in passing during the 2010 installment by Woody (Tom Hanks). The narrative then skips ahead to the modern-day where Bonnie (Madeleine McGraw), the new owner of Andy’s toy collection, is about to embark on her first day of kindergarten. Although she’s growing up, she still plays with her toys – at least some of them. One doll often left in the closet is Woody. Bonnie removes his sheriff’s star and pins it on Jessie (Joan Cusack). Woody still believes in the creed that it is a toy’s noble duty to make its owner’s life better, so he hides in Bonnie’s backpack and accompanies her to school. While there, he unobtrusively helps her with an arts-and-crafts project. She creates a new toy – “Forky” (Tony Hale) – out of a plastic spork, a broken tongue-depresser, and pipecleaners. She falls in love with the home-made toy and Woody appoints himself as Forky’s guardian. When Forky escapes during an RV trip, Woody sets off in pursuit. Buzz (Tim Allen) soon follows. While on Forky’s trail, Woody is reunited with Bo Peep and meets a doll, Gabby Gabby (Christina Hendricks), who wants something only he can give.

Early details for Toy Story 4 indicated it was going to be a “romantic comedy” featuring Woody and Bo Peep. Distilled to its essence, perhaps that’s what the movie is, although the romantic elements are dialed-down. Bo Peep has become an action hero and her interactions with Woody are more of the “buddy” variety. (These come at the expense of Buzz, whose screen time is sharply curtailed.) There are a few newcomers – the conflicted Gabby Gabby, who’s more lonely and misguided than bad; the Canadian Evel Knievel knockoff, Duke Caboom (Keanu Reeves); the mismatched stuffed animal odd couple of Bunny (Jordan Peele) and Ducky (Keegan-Michael Key); and the voiceless Vincent, a mannequin who looks like he was abducted from the Goosebumps series. Old-timers like Rex (Wallace Shawn), Hamm (John Ratzenberger), Jessie, and Mr. Potato Head (Don Rickles in a posthumous performance made possible by the manipulation of previously recorded audio material) are given token “moments.”

One area where Toy Story 4 excels is in its comedy. The film has a lighter touch than Toy Story 3, which ventured into some dark areas. Forky’s trash-loving antics (and Woody’s exasperated attempts to keep him corralled) make for an effective recurring joke. Keanu Reeves’ Duke Caboom is a perfect match for those who remember the actor as Ted. And Buzz continues to misunderstand just about everything, including what it means to hear his inner voice. (He gets to utter his signature line – or at least part of it. No Toy Story movie would be complete without it, just like no Die Hard would be complete without…you know.) 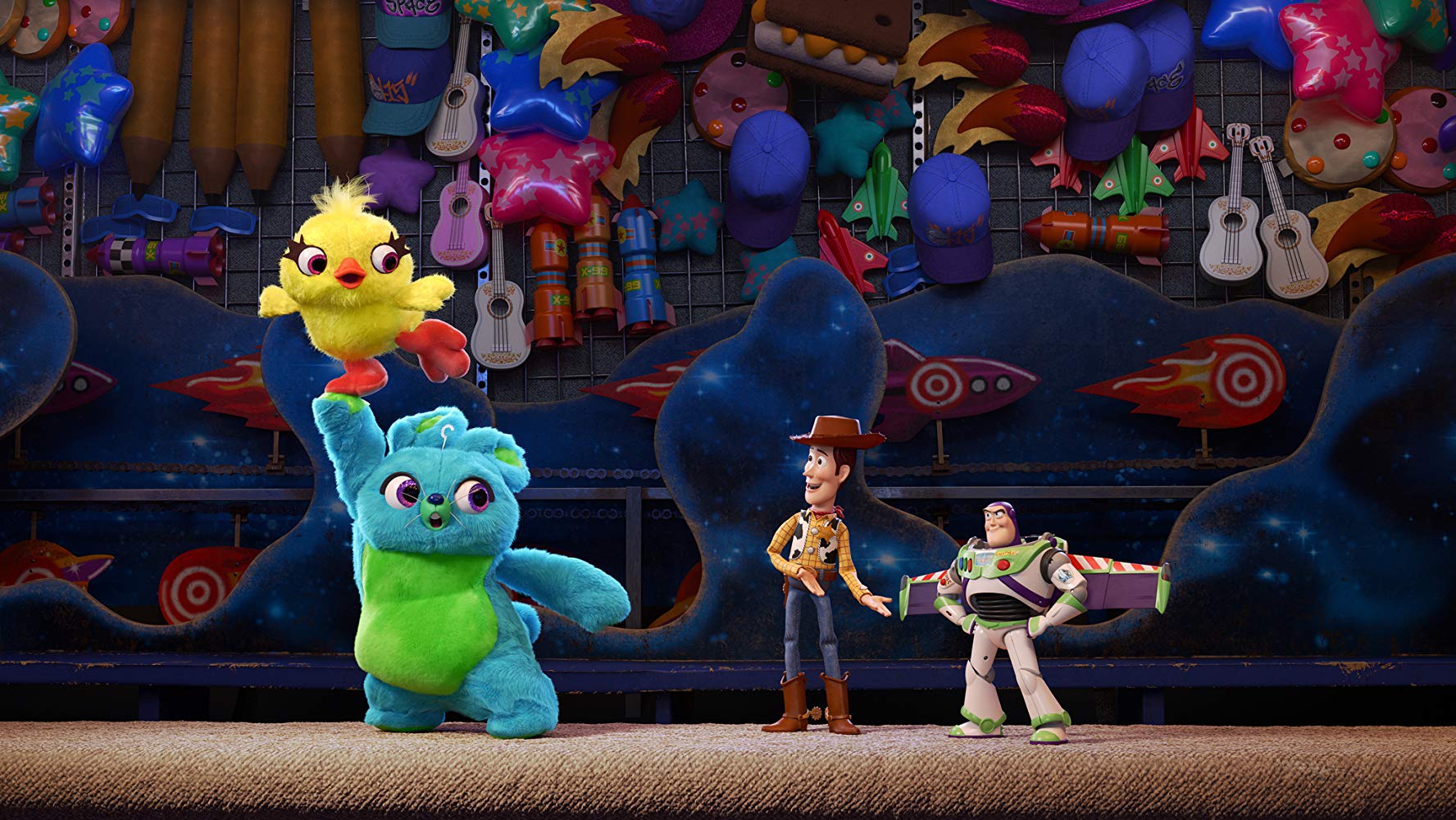 Toy Story 4 is officially directed by first-timer Josh Cooley, whose previous writing credit for Inside Out made him a candidate for this job. By all accounts, Cooley worked closely with Pixar’s ex-CEO John Lasseter. Lasseter, who directed Toy Story and Toy Story 2, was at one time attached as the sole helmsman of Toy Story 4 but his participation, if any, is unacknowledged (save a “story by” credit). Cooley’s direction is workmanlike but there’s nothing remarkable about the film’s look. Perhaps that’s because 3D animation has hit a “wall” where advancements are incremental. Toy Story 4’s look is on par with most high-end animated films in terms of visual “pop” and spectacle.

For some viewers in their late 20s or early 30s, Toy Story 4 might represent a first encounter with nostalgia. The movie feels like it’s more interested in recapturing things from the past than blazing a new path. In 2019, Disney is dispensing a lot of last chapters. Avengers: Endgame and The Rise of Skywalker are the most obvious, but Toy Story 4 deserves a place alongside them. The animated series may have lasted one film too many but at least the latest installment doesn’t diminish the power of its predecessors. I’m going to miss Woody, Buzz, and the rest but, although parting is such sweet sorrow, I hope this is goodbye. It’s time to go and the ending offers a graceful, hopeful exit.